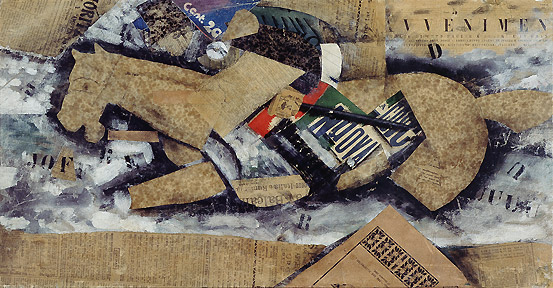 With the outbreak of the Great War, several of the Futurists, spurred by Filippo Tommaso Marinetti, turned their attention to war subjects, even before Italy entered the war on the side of the French and British (May 1915). This collage depicts a galloping cavalry officer, with knee-length boots, a red trousers and a cylindrical helmet. The use of newspaper clippings, and stenciled letters, testifies once more to Carlo Carrà's close ties to Parisian Cubism. The horse is preceded by the letters JOFFRE, the name of the French General who won the Battle of the Marne between September 5-12, 1914. Other clippings (Cinemas and MORITZ, for example) strike a discordant note of entertainment and sport and introduce an element of ambiguity and irony. The horse does indeed seem less in pursuit of the enemy than wading through encumbering garbage. The explanation may rest with Carrà's awareness of the force of irony already pervading certain Parisian art circles, and with his growing distraction from Futurist concerns in favor of “plastic values” and spiritual content that was to lead to his abandonment of the movement in 1915.